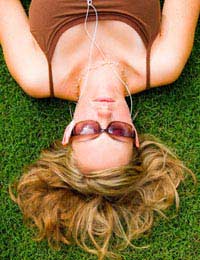 Depression is a common but complex mental health challenge to treat, in part because it can stem from such a multitude of factors. Often, what works for one person is ineffective for another individual. For some people, finding a non-drug treatment is important to reduce the likelihood of side-effects, particularly if they find the treatment doesn't work and they need to try another one.

There have been a small number of studies performed on music therapy but the study sizes and some flaws have left the results somewhat unclear. A recent study set out to analyse all of the studies to determine whether music therapy could help depression. It found that there was some positive contribution to reduced symptoms of depression but a larger study is recommended.

What is Music Therapy?

Music therapy is an intervention that is created to help enhance health by using music as an interaction tool between a therapist and his or her patient. This should be done within a specific theoretical structure but many variations occur, making it difficult to perform studies on music therapy.

While there are numerous medications and alternative therapies for depression, music therapy has more recently gained attention, particularly because it is not associated with the side-effects common to prescription medications. It is thought that music therapy can help some people to battle depression while providing benefits to their overall mental health. This belief is based on a recent study mentioned earlier, which looked at the sum of research on music therapy to date, as well as some of the individual studies it examined.

Five small studies on music therapy were analysed, and it was concluded that music therapy could help reduce the symptoms of depression. Its use alone and not in conjunction with other therapies, however, is still uncertain.

Where music therapy seemed to have the most benefit was where theory-based techniques were used. The therapy itself involves listening to music within groups, as well as body movement, painting to music and also improvised singing.

Reducing the Symptoms of Depression

The study participants ranged in age from adolescents to adults aged sixty and older. Even though there wasn’t a clear indication that music therapy was responsible for the improvement alone, it was still positively linked to the reduction in depression symptoms.

One reason for positive outcomes in a group setting might be less about the therapy itself and more to do with the socialisation aspect. By connecting with other people, a depressed person could feel less socially isolated. It is also possible that the therapeutic relationship with the facilitator of the music therapy helped the patient to feel better from the sessions.

Choosing the Right Treatment for Depression

Music therapy is largely unregulated in many countries although it is recognised in Britain as a mental health treatment. This recent look at the available evidence suggests a need for a larger study on music therapy and depression. It is likely that it will not be used for severe depression without some other form of medical support.

Medications and traditional psychotherapy have an important place as treatment options for depression, particularly severe depression. But for those who want to avoid the side-effects of drug therapies and more so if their depression is mild, music therapy is an alternative that could help boost their mental health.

How Self Help Books Can Worsen Depression