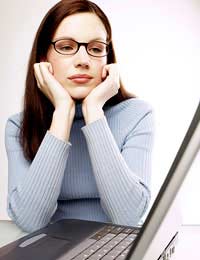 Seasonal affective disorder (SAD) is a recognized depressive condition that occurs in a cyclical and seasonal pattern. What this means is that the symptoms of SAD tend to be experienced during a specific season and then ease as a new season approaches. For most people SAD symptoms begin during the fall and winter months and then disappear during the spring and summer months.

There are many factors that influence who gets SAD, including your own genetic makeup coupled with the availability of sunlight. One belief is that reduced amounts of sunlight alter the body's circadian rhythms. These rhythms maintain the body's 'internal clock' that signal when it's time to sleep and when it's time to wake up. When these rhythms are disrupted, depression can be triggered. Another suggestion is that melatonin, a hormone that affects sleep and is correlated with depression, is not properly produced or regulated. The actual production of melatonin is raised during winter months. Also, the neurotransmitter serotonin, which plays a key role in mood regulation, is influenced by sunlight and as such, a decrease in sunlight during winter months can affect your moods and may contribute to SAD.

Approximately three quarters of people affected by SAD are women and it tends to occur primarily in adults. Also, as latitude goes up, the occurrence of SAD tends to similarly increase. It is likely that SAD occurs when a person has a genetic vulnerability combined with the environmental factors such as low light conditions. People who work indoors a great deal and obtain little outdoor light are also thought to be at risk for SAD.

Symptoms of SAD include those seen in typical depression, albeit milder. Other symptoms commonly experienced are:

For most people, the symptoms of SAD will commence around the fall months and will be strongest during the wintertime, before slowly easing off as sunlight increases in the spring and summer. Some may even find a dramatic increase in stamina and energy levels once sunlight levels increase. People, who spend a great deal of time indoors, such as office workers, may experience SAD symptoms year round. It's important to realize that SAD symptoms are not the same as the 'winter blues.' They don't involve an occasional low mood but rather, are experienced on a regular basis and affect a person's ability to function to full potential.

Outdoor light, even during cloudy days, can still provide enough beneficial light to help reduce the symptoms of SAD. One study found that an hour of time spent outside each day provided significant relief from the symptoms of SAD. The addition of walking or other forms of exercise further increased the benefits.

Unfortunately, your job or other commitments may not allow for this amount of time outside each day. In addition, weather may entail heavy rain, snow or cold temperatures, and most people aren't interested in spending time outdoors during such conditions. As such, a light box may be a helpful option. Light therapy is one of the more commonly used treatments for SAD. By sitting several feet away from a specially made light, many people experience relief from the symptoms of SAD. Such lights are marketed specifically for treating SAD and are usually at least ten times brighter than a normal indoor light. Treatment generally involves approximately half an hour of light exposure each morning and many people use this time to read, enjoy a meal or partake in another simple but enjoyable activity.

Some individuals find that psychotherapy is helpful for treating underlying worries and negative thoughts that are experienced as a symptom of SAD. Selective serotonin reuptake inhibitors (SSRIs) have also shown promise in treating SAD. Mood stabilisers such as lithium are occasionally prescribed to treat SAD as well. It may be more convenient for you to take a medication if you don't have the time to spend under a light box. Others will find that the use of light therapy, medication, and talking therapy provides the best results.

Other ways to cope with SAD include:

SAD is a common depressive disorder and is treatable. Speak with your doctor about light therapy, medications and psychotherapy to treat the uncomfortable symptoms so you can get back to enjoying every season of the year.

Depression and Bullying
Share Your Story, Join the Discussion or Seek Advice..
I had SAD for many years from teens to early 20s every Autumn & Winter and I would absolutely dread the clocks changing in October as it would signal the real start of the short dark miserable days. It's true, it's not the same as Winter blues, which I porbably get every now and then these days. I would literally get home, lie on the sofa and be physically unable to move. Everything seemed bleak and hopeless, and I had no energy at all. I would overeat and feel tearful over nothing. The thing that helped me was to start going to a group exercise or dance class (e.g. Zumba, Street Dance, Martial Arts), where you have something to look forward to every week, a chance to meet new people, a way to release some adrenaline and just have fun. Also, I make sure I go outside for a walk every lunchtime, all year round, but especially in the winter. I also try and have a few fun things lined up such as a trip to the theatre, so that life doesn't seem hopeless, but there are things to look forward to.
Londonshaz - 28-Aug-12 @ 3:35 PM
Title:
(never shown)
Firstname:
(never shown)
Surname:
(never shown)
Email:
(never shown)
Nickname:
(shown)
Comment:
Validate: