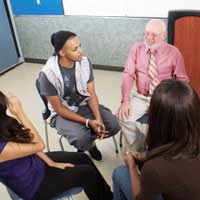 Post-traumatic stress disorder (PTSD) can be prompted by many different kinds of traumatic events but it can be particularly debilitating when it occurs from events that were experienced on the battlefield.

While many people will experience a traumatic event in their lives at some point in time, they tend to commonly feel symptoms that are temporary and normal following the event. They might experience a decreased appetite, anxiety, concentration challenges and sleep disorders.

These symptoms, however, are generally short-lived and they decrease as time goes on. Yet, in some people they can be persistent and may, in fact, increase over time, leading to a diagnosis of PTSD.

It actually was not until the Vietnam War that PTSD was initially described as a disorder and received its name. When it was found that soldiers returning from the war could not adapt to 'normal' life afterwards, investigation into the possibility of a disorder occurred.

Causes of PTSD in Soldiers

PTSD is not only caused by the more obvious acts of war, but it may also result from a soldier's experience in non-combat, where violence and aggression to civilians or enemy combatants may occur. Some of those who suffer from PTSD are also ones who have not partaken directly in any violence towards others but instead, suffer from guilt and frustration from observing the events or being associated with the acts.

Symptoms may not occur immediately after the events - although their onset can still be rapid - but they may begin months or even years after the traumatic experience.

Challenges of Treating PTSD in Soldiers

For soldiers, PTSD is a very real and difficult disorder to address and it can be quite widespread. In one recent study conducted by the Army in the United States, it was found that one in eight soldiers had experienced symptoms of PTSD. Perhaps more worrying was the fact that less than one half of those with these symptoms actually sought out help.

It has been suggested that fears regarding the stigma associated with mental health disorders may be responsible for such a large proportion essentially ignoring their symptoms and not speaking out about their problems. Soldiers are often meant to be seen as strong and there is a mistaken belief that any painful experiences that a soldier struggles to handle are a sign of weakness.

Ultimately, experts recommend that the barriers themselves be addressed, which should help to allow for soldiers to obtain treatment soon after they begin experiencing symptoms. By working to remove the stigma associated with mental health disorders such as PTSD, those who have fought in wars and suffered long-term consequences can obtain the treatment they need and deserve.

After diagnosis with PTSD, a solider can expect a combination of medication and therapy. There are also war veterans groups that are self-directed by participants and allow members to talk with others who have dealt with similar feelings and challenges related to PTSD and the war.

The best approach, however, remains to reach out initially to obtain diagnosis and treatment. By refusing to carry the trauma alone, a solider can take the important first step to healing his or her PTSD and can get back to feeling positive and healthy each day.