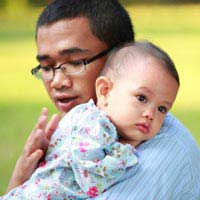 Postnatal depression is a major problem for many women, with plenty of attention given to prevention, detection and treatment. But for men who experience strong emotions – often depressive – around their new family member, their experience is often ignored.

Reality of Postnatal Depression in Men

It is not, however, quite the same as the form of postnatal depression that women experience, which is complicated by many factors such as hormonal changes. It still deserves recognition and treatment. If left untreated, consequences can be similar to those seen for postnatal depression in women, where the entire family can suffer the results.

Dangers of Prenatal and Postpartum Depression

Research has already made it clear that there are many dangers that occur when a mother experiences these kinds of depression. Dangers are ones relevant directly to the mother herself as well as other family members. It is a common kind of depression and can be mild or severe.

By now looking at men, researchers found some interesting information. They estimated that the occurrence of this kind of depression in men was around ten percent. Lower rates were seen in the first three postpartum months while the highest incidence was in the six-month postpartum period.

Another intriguing finding was that there were noticeable differences from one study location to another. Higher incidences of prenatal and postpartum depression in men were seen in the United States versus internationally.

Depression in Mothers and Fathers

Also, there was a link between depression seen in mothers and fathers. Where one parent experiences depression, the other is more likely to follow suit or be experiencing it based on a common, shared predisposing factor.

This means that treatment and any kinds of intervention methods would need to focus on both parents as a couple rather than just one or the other. It might also help bring in resources for the other parent to ensure they are getting the support they need.

Given that postnatal depression not only harms those who experience it but also the infants and other children involved, it is very important to identify risk early on. Follow-up studies to this one are aimed at identifying risk factors in fathers. One such risk factor, as mentioned, is a mother who has already been identified as high risk or currently experiencing depression. Another approach might be a questionnaire for fathers to fill out, which would be used by the managing physician.

Postnatal depression is common in women and appears to be a problem in men as well. Now that we know men suffer from it as well, it is hoped that we can begin to find ways to increase awareness, detection methods and treatment options so the entire family is protected and feels positive.