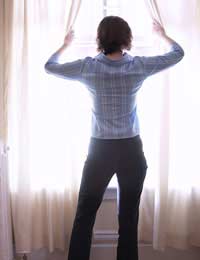 Seasonal Affective Disorder (SAD) is a type of depression that affects many people around the world, mostly through the winter months when light levels are low. In particular, those residing in the extreme northern and southern latitudes are prone to SAD anytime from the fall to the earlier spring months.

Researchers are still unsure exactly what causes SAD but one theory is that there is a relationship to the hormone melatonin. Melatonin is important in regulating your internal body clock. This body clock is what prompts us to feel sleepy when it is dark at night and then wake up when the light occurs in the morning. This is why SAD is most prominent in the darker winter months as well as the spring yet doesn't tend to occur during the summer months.

How Does Melatonin Work?

Your body produces melatonin primarily at night rather than during the daytime hours. This is one reason that researchers support the belief that melatonin makes people feel quite tired and sleepy at night. One theory regarding melatonin and SAD is that if melatonin is improperly released during the winter, people will suffer heightened feelings of exhaustion and depression. Following on this theory is the premise that a person's internal clock is disrupted during the winter, which means that the regulation of their light and dark cycle goes awry. The consequence could be damage to their melatonin release, which may then persist for some time.

Common treatment for SAD has traditionally been light therapy, but not everyone responds to this type of treatment. Experimentation involving melatonin, however, has yielded some promising results. Because the majority of SAD sufferers become depressed from the delayed rising of the sun during winter months, which disrupts their circadian rhythms, the idea of administering melatonin is a potentially useful one.

Researchers have tested whether those who are unresponsive to light therapy are able to benefit from very small doses of melatonin. The hope has been that the melatonin will reset the body's internal clock. In one study that was performed in the United States, a team of researchers administered melatonin to 68 patients who had SAD. The research team measured the difference between the time that melatonin is released normally and the midway point of sleep, which let them predict the ideal time required to administer melatonin. The aim was to align the patients' sleep cycles with clock time. They found that those patients who received the melatonin at the ideal time demonstrated the strongest mood benefits.

Since the treatment is still in the experimental stages, it will be some time before it is recommended for SAD. Still, there is hope that by getting the timing 'right' and shifting a person's circadian rhythm back to normalcy, SAD symptoms might ease. For people who struggle with SAD, the typical recommendation at this time would be to see your doctor regarding appropriate treatment. He or she will also alert you to any new developments regarding approval of melatonin for SAD. Although melatonin is available legally over-the-counter in many countries, it is still unavailable in the United Kingdom for general purchase. Hopefully, further research in the next few years will provide positive results for the use of melatonin to treat SAD, which is excellent news for those who suffer from this common but difficult form of depression.